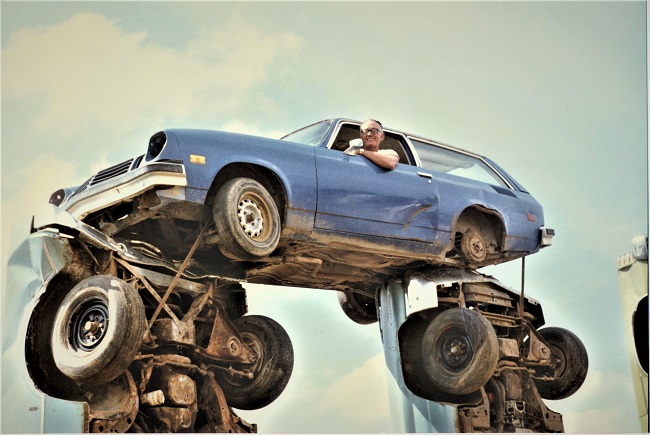 Carhenge In A Capsule

Just north of Alliance, Nebraska, along Highway 87, stands a replication of Stonehenge, England’s ancient mystical alignment of stones that chart the sun and moon phases.

Stonehenge stands alone on a plain in England.

Carhenge towers over the plains of Nebraska.

Carhenge consists of the circle of cars, three standing trilithons within the circle, the heel stone, slaughter stone, and two station stones. Sir John Aubrey first recognized the earthworks and great stones as a prehistoric temple in 1648. It was not until excavations undertaken in the 1920’s that there were found to be holes cut to hold timber uprights. A total of 56 holes were discovered and named the Aubrey Holes in honor of his observation.

The artist of this unique car sculpture, Jim Reinders, experimented with unusual and interesting artistic creations throughout his life. While living in England, he had the opportunity to study the design and purpose of Stonehenge. His desire to copy Stonehenge in physical size and placement came to fruition in the summer of 1987 with the help of many family members.  Carhenge was built as a memorial to Reinders’ father who once lived on the farm where Carhenge now stands. While relatives were gathered following the death of Reinders’ father in 1982, the discussion turned to a memorial and the idea of a Stonehenge replica was developed. The family agreed to gather in five years and build it. The clan, about 35 strong, gathered in June of 1987 and went to work. The dedication was held on the Summer Solstice in 1987 with champagne, poetry, songs, and a play written by the family.

Thirty nine automobiles were placed to assume the same proportions as Stonehenge with the circle measuring approximately 96 feet in diameter. Some autos are held upright in pits five feet deep, trunk end down, while those care which are placed to form the arches have been welded in place. All are covered with gray spray paint. The honor of depicting the heel stone goes to a 1962 Caddy.

Additional car sculptures have been erected at the site known as the Car Art Reserve. One of the first sculptures to be added is the “Spawning Salmon” created by 29 year old Geoff Sandhurst from Canada. He won a $2500 prize and placement of his car art creation at the Reserve.

Dino, the dinosaur was built by Merle Stone of Hemingford.

Reinders’ “Fourd Seasons” comprised only of Fords and inspired by Vivaldi’s Four Seasons, suggests the Nebraska landscape’s seasonal changes as wheat is planted, grows, matures, and the field lies barren during a windy winter.

The three bells, built by Reinders represent the three Reinders siblings.  The various sculptures and time capsules (Car-sules) have been contributed by local people over the years as the Car Art Reserve continues to grow.

Jim Reinders gave Carhenge and the 10 acres of ground to the Friends of Carhenge, a local group of dedicated people who preserved and maintained it until October of 2013 when it was gifted to the City of Alliance.

Carhenge’s uniqueness, novelty and unusual components continue to draw the attention of film and television production crews as well as over 100,000 visitors from all over the world.

Jim was above all a joy to know. He was an easy going and generous extrovert, his door always wide open to friends and family. Certainly he was an interesting conversationalist and a captivating story teller, but he was also an attentive and caring listener. It was his desire to make everyone’s life a little better, easier or more enjoyable. Jim was fun and quirky and his needs were few as he enjoyed the simple pleasures of life, especially relaxing in the sunshine after lunch. He faithfully read the Bible and The Imitation of Christ. He was a man of great strength, integrity and character, living an exemplary life guided by his personal mantra, “Conceptualize, Visualize, Actualize.”

Growing up on several farms near Alliance, Jim attended a one-room country school and graduated at age 16 from Alliance H.S. in 1944. Upon reaching 17 years of age, he was permitted to join the U.S. Navy and served in the South Pacific. Honorably discharged in 1946, he enrolled at the University of Nebraska and, appreciative of the help of the GI Bill and his wife, he graduated in 1950 with a B.S. in Electrical Engineering.

Jim’s passion for travel was fulfilled during his career of 33 years in the oil industry, primarily with Schlumberger. His work took him to many states and over 30 countries spanning the globe. He and his wife lived in Tehran, Iran as he managed Persian Gulf operations from 1973 until 1976. The highlight of his career was acting as Technical Manager Europe from 1976 until 1981, residing in London and traveling throughout the Continent. Retired from Schlumberger and back in the States, Jim served as Geo Van, Inc. President, retiring again in 1984. He then did general consulting work over the next 20 years.

Jim orchestrated and enjoyed many destination family reunions where old family traditions were passed along and hilarious new traditions and contests were instituted. He also took pleasure in his profession, poker, bridge, games of Trivial Pursuit, Toast Masters, sculpting, painting, hobby welding, hiking, biking, jogging and swimming. He participated in the Senior Olympics until he was 80 and until his final move to Houston, he annually ascended Wheeler Peak with the Over-the-Hill-Gang comprised of cherished comrades in Albuquerque. 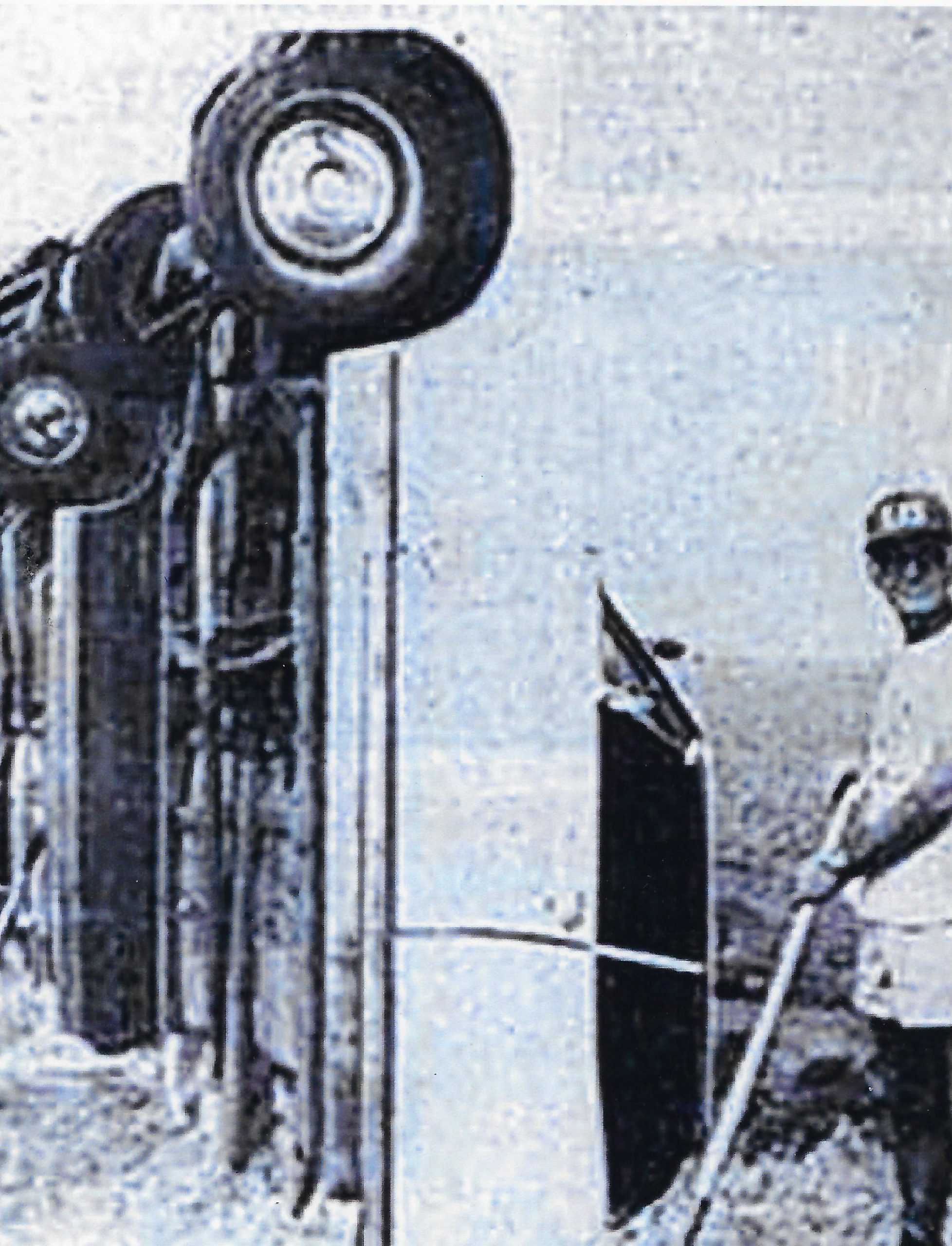 Carhenge, constructed during a family reunion to replicate England’s Stonehenge, was Jim’s greatest artistic endeavor. He relished the international notoriety that Carhenge garnered: appearances on TV shows such as Connie Chung and To Tell the Truth, numerous newspaper and magazine interviews and stories, including those in Forbes and People, and the appearance of Carhenge in books, movies, videos and even on an album cover. He embraced his role at the Solar Eclipse ’17 celebration held at Carhenge and most recently collaborated on his inclusion in the upcoming Dull Men’s Club calendar of 2022.

Jim’s family and many friends savored the time they shared. He was well loved. He will be greatly missed. Interment will be alongside his wife at the Nebraska Veterans Cemetery at Alliance. 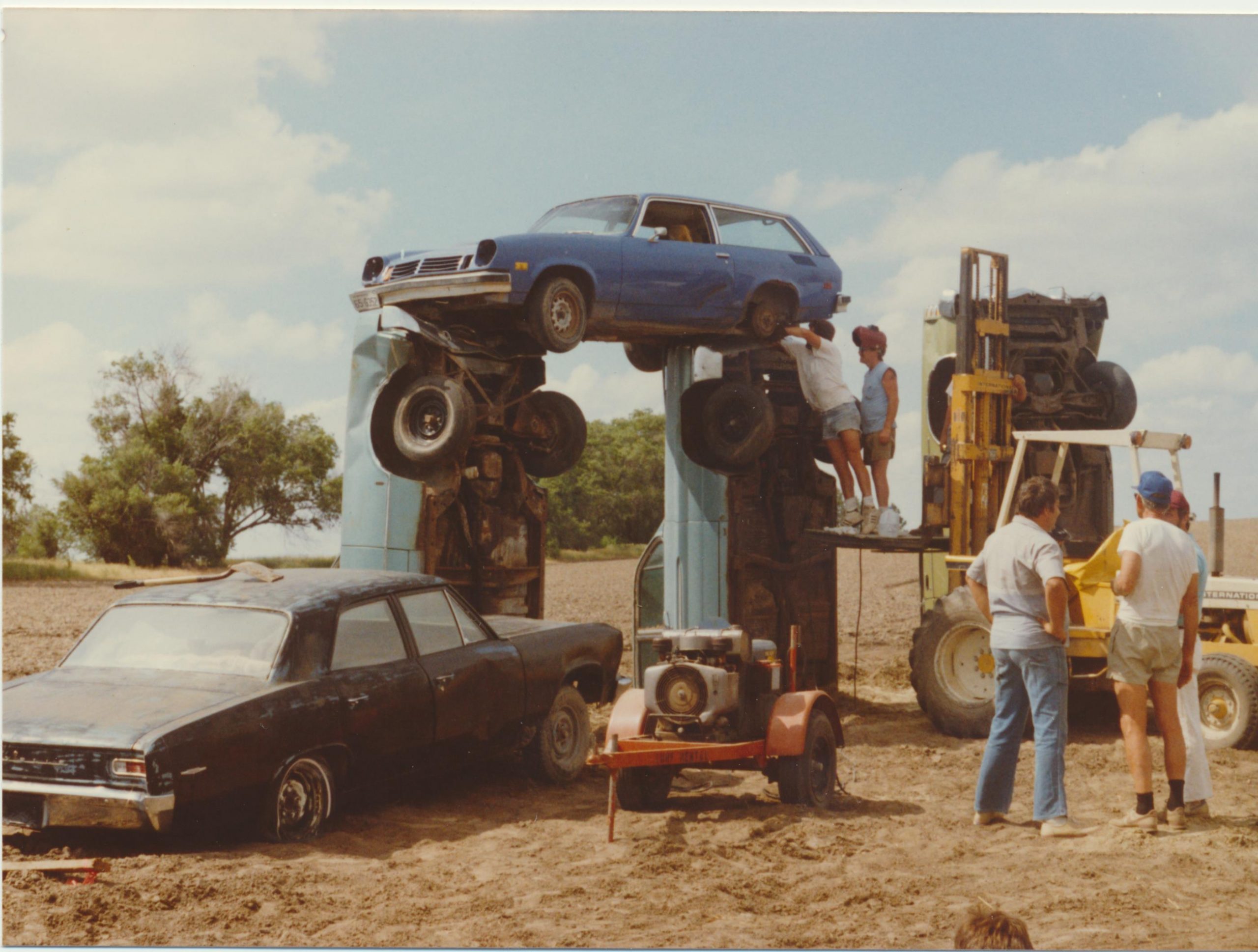 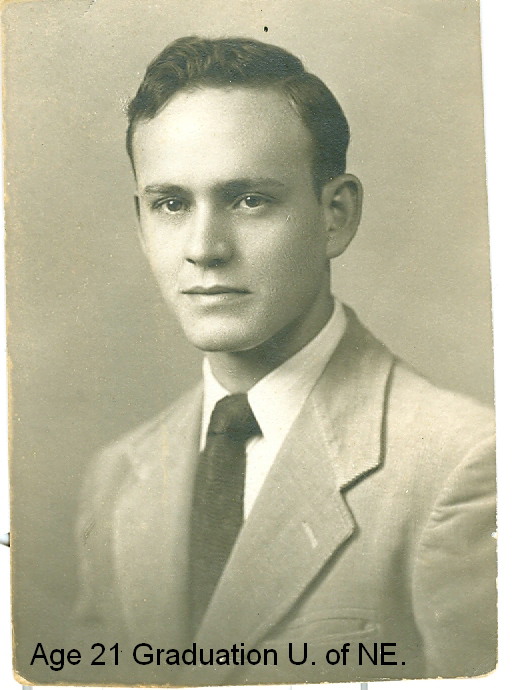 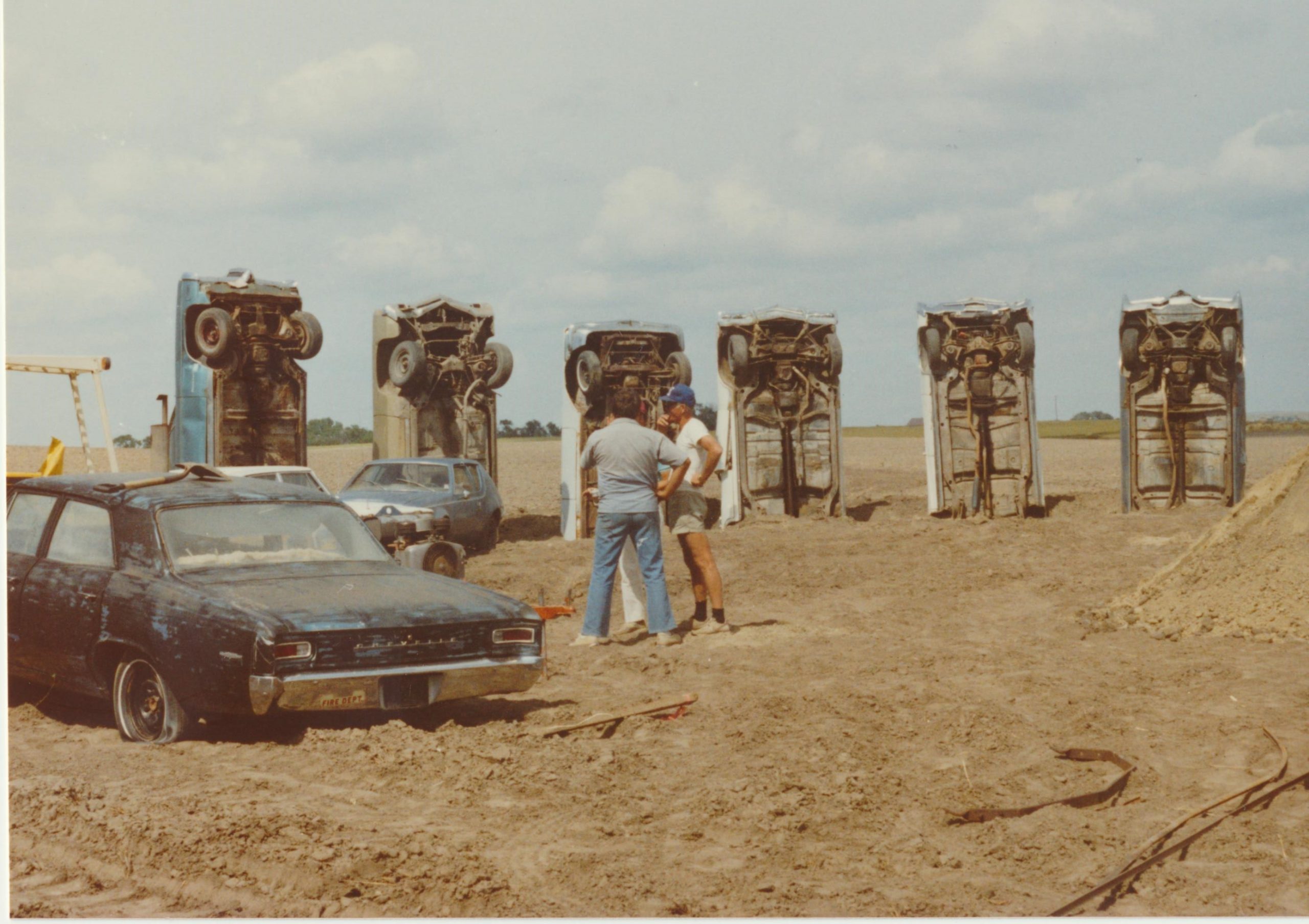 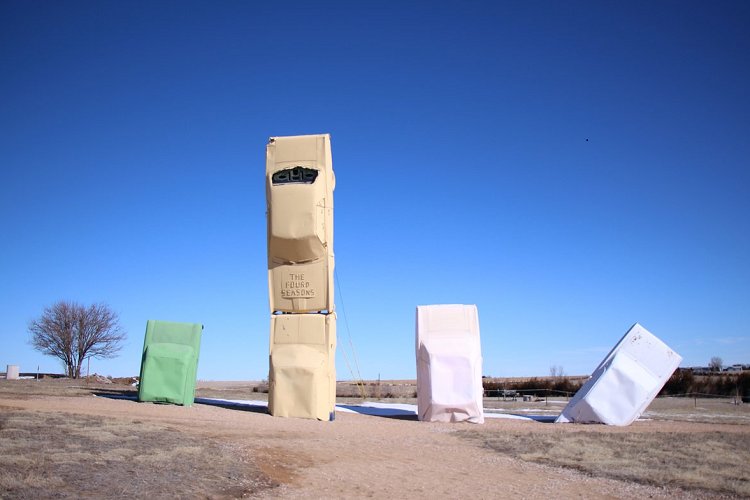 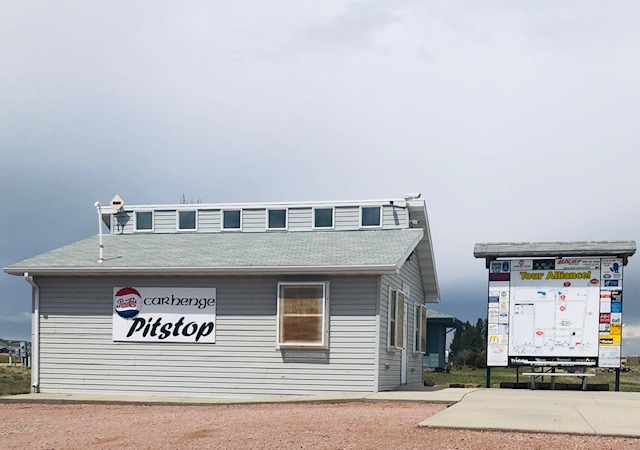 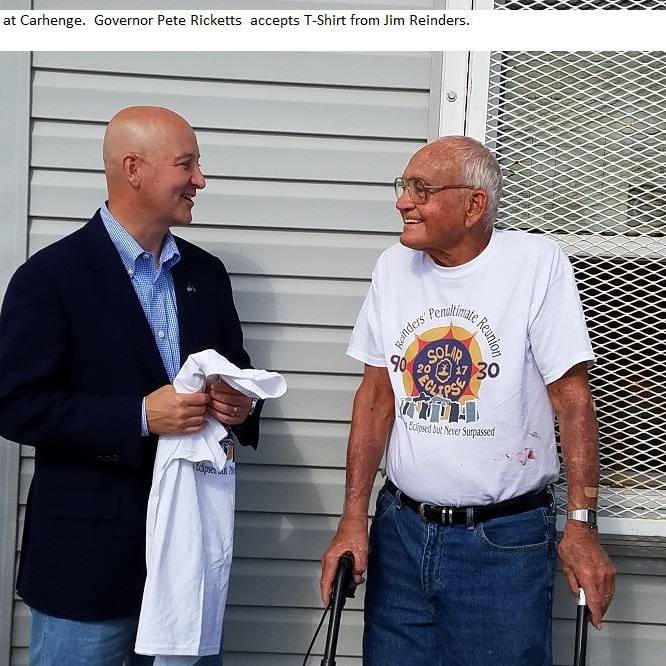 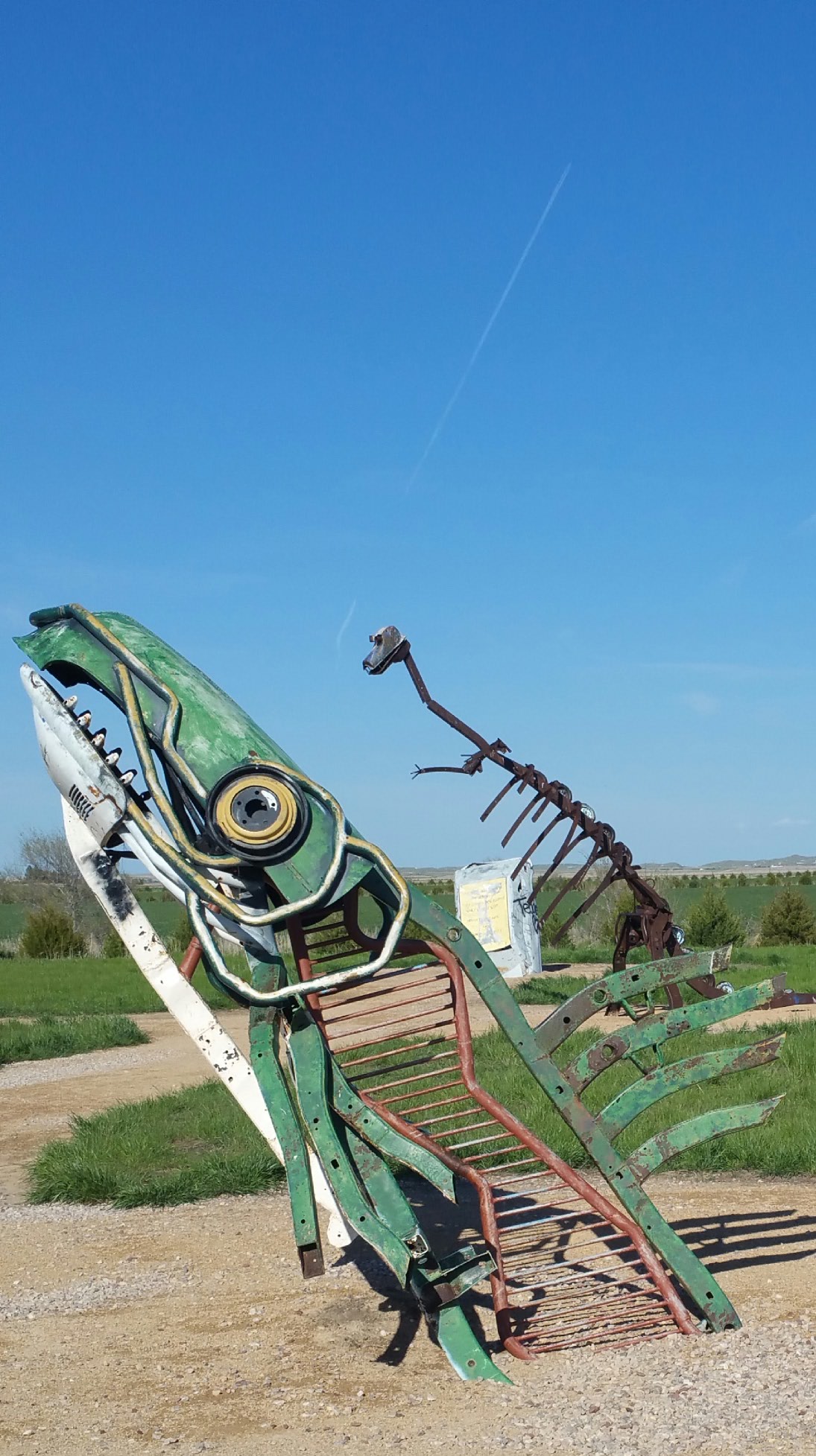 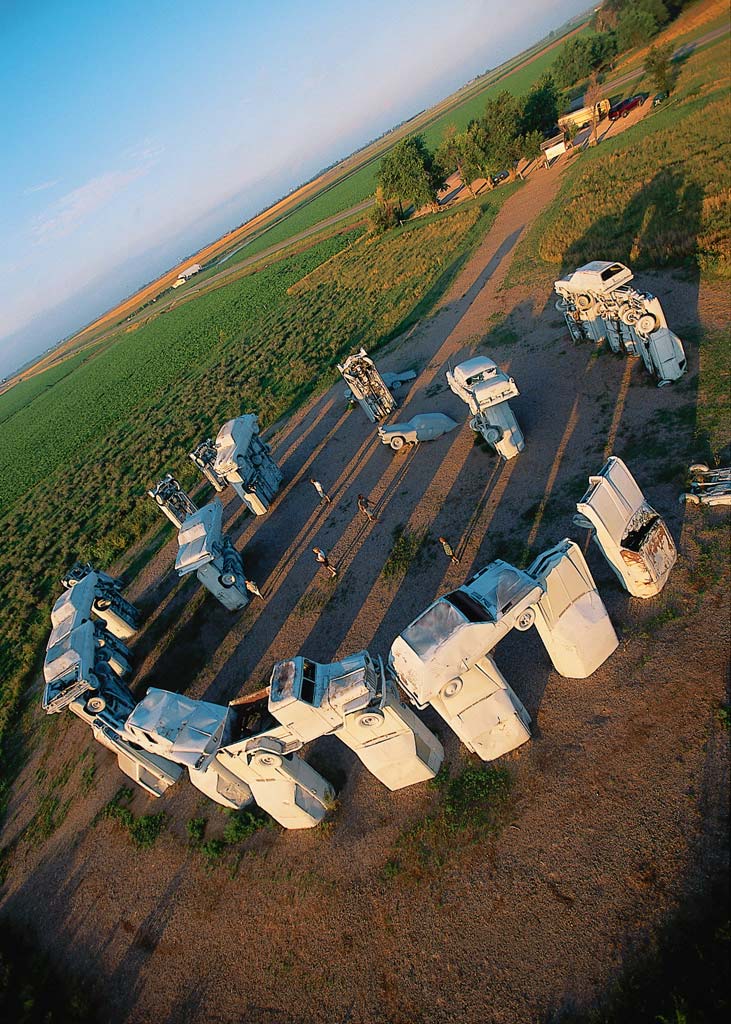 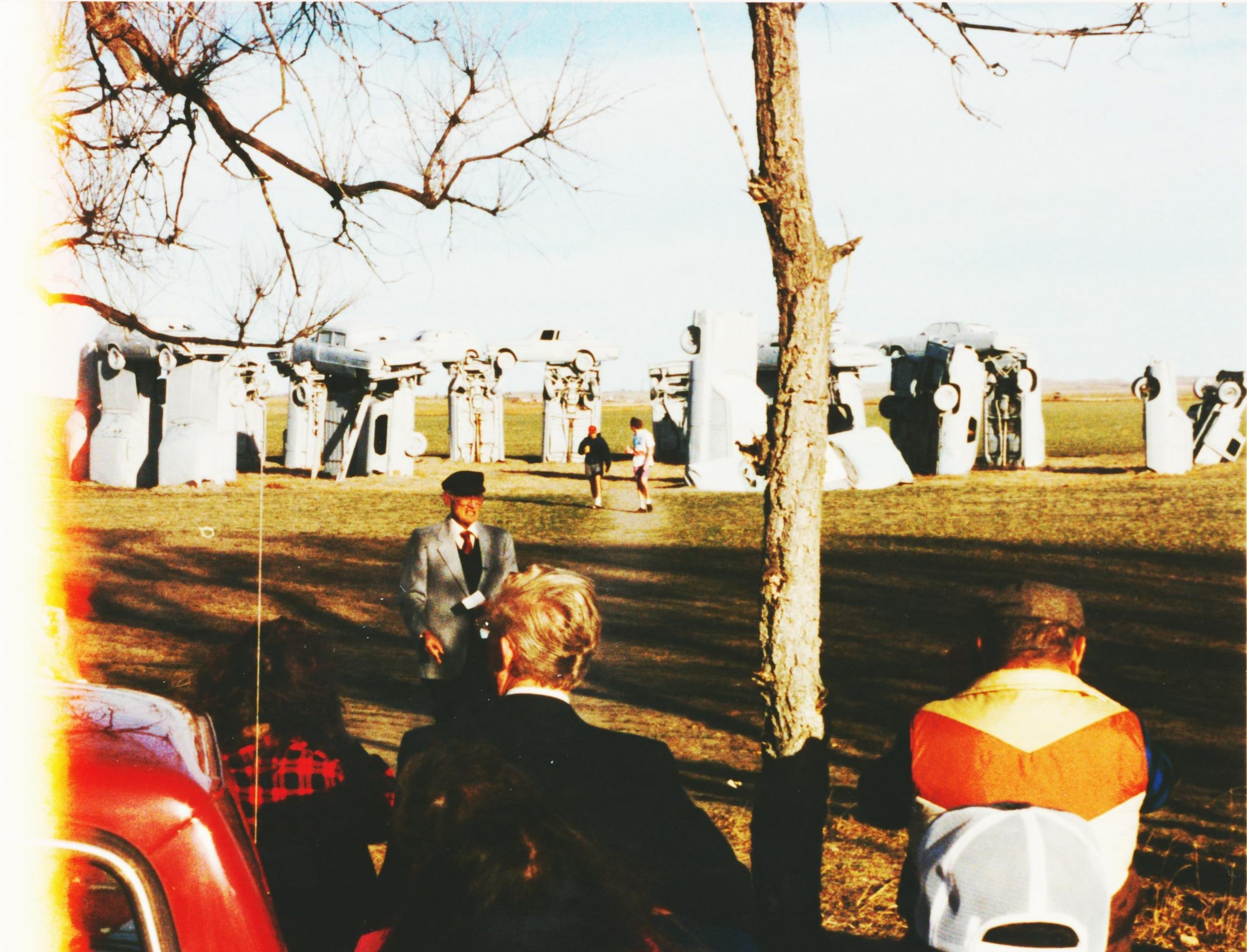